It has completely changed my life. I am looking forward to getting a social life back again. I can go out and eat in a restaurant because I look fine and I know that my new set of teeth will stay in place. 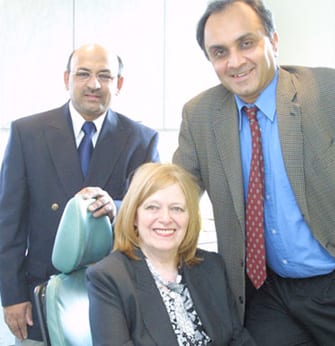 For Mrs Brenda Lee, problems with here teeth weren’t something that was restricted to a twice year visit to the dentist – they were an on-going nightmare that prevented her having any social life, and even stopped her going into hospital for a much need knee operation, because her confidence was so low.

Mrs Lee, 59, had always had problems with her teeth, with the result that her local dentist in Edgware, north London, had gradually removed almost all of them, one by one, leaving Mrs Lee with just one tooth of her own in her upper jaw.

“It was my worse nightmare. I looked about 90, I simply couldn’t go out and enjoy myself – first impressions last and I just couldn’t speak to anybody face to face because I was so ashamed of my teeth. People notice – it’s the first thing they see”.

In fact Mrs Lee’s confidence was at such a low point that she postponed a badly needed operation on her knee five times because she couldn’t face the prospect of going into hospital.

“Even though my knee badly needed an operation, I was so worried about my teeth that I couldn’t have it done. I couldn’t bear the thought of someone seeing me without my teeth in – even doctors while I was asleep”.

Mrs Lee did consider having conventional implants fitted with a tooth on the top of titanium rods, which are inserted in the gum, even though this treatment can cost around £25,000 for a single jaw. “I thought I would have to re-mortgage my house to raise the money”.

Eventually it got to the point where Mrs Lee’s local hospital told here that she would only have one more chance of getting the operation done. It was at this point that her dentist recommended she talk to the London Implant Centre in Victoria, because he had heard about their mini implant system.

As a result Mrs Lee had the remaining tooth in her upper jaw removed, and a set of new dentures fixed firmly in place with mini implants at a much lower cost , and a price that was affordable for Mrs Lees.

“It has completely changed my life. I had enough confidence to go into hospital to have the operation on my knee, and now I am looking forward to getting a social life back again. I can go out and eat in a restaurant because I look fine and I know that my new set of teeth will stay in place”.

In fact Mrs Lee found that the installation of the implants was so simple that she did not need sedation, she simply had the same gum injection that is used for fillings.

“I just think that there must be so many people out there like me who are having miserable lives because their teeth are so bad, but are reluctant to have a full set of false teeth because they are worried about them coming out in public. Mini implants have been the answer for me, at a price I could afford”.

Why not spread your payments?

Find out the options available to you